What Color Shoes To Wear With A Navy Dress, According To Celeb Trendsetters

Wearing a navy blue statement dress can feel so limiting if you're short on good style inspo. Conventional fashion wisdom would likely tell you to throw on a pair of black heels and play it safe. But, there’s no place for safe choices in fashion. Styling a navy dress shouldn't all the sudden feel like you're sacrificing your personality. And, no self-respecting fashion girl would tell you to do so.

So that you don't have to take our word for it, we compiled some fresh style inspiration from top celebrity trendsetters. They're essentially voting with their casual street style and their special-occasion looks.

After sifting and sorting through the freshest navy dress looks, here's what we found: There is a lot of room for fun when styling shoes with navy dresses. And, yet, there are also ways style a pair of not-so-safe black heels with them. When it comes to styling a navy blue dress, the sky is the limit and these twenty-one looks prove it.

Aussie supermodel Miranda Kerr's vote for what color shoes to wear with a navy dress is - more navy. Seen out and about looking unbelievably “glowy,” Miranda styled her navy blue off the shoulder maxi dress with coordinating navy blue and red sandals. The entire outfit contrasts wonderfully with her bright red makeup and nails and black leather shoulder bag.

Model Barbie Ferreira is a veteran in the style game. However, as a renaissance woman, you likely recently discovered her via her acting career. Not only is Barbie a plus-sized model but as an actress, she plays Kat Hernandez on HBO's breakout teen drama Euphoria.

Barbie cast her vote for what color shoes to wear with a navy blue dress at Euphoria's L.A. premiere event. According to Barbie, it's - "go gold or go home."

Victoria Beckham has been a fashion expert since she was the"poshest" member in the Spice Girls. So, naturally, we got her input on how to style shoes with a navy blue dress. For inspiration that was incredibly fashion-forward, we didn't need to look any further than her navy blue ensemble she wore to the Meghan Markle and Prince Harry's Royal Wedding.

Victoria wore a dress from her own mainline label. The mid-length dress featured dolman sleeves and a front slit with a D-ring closure. She finished the outfit with a netted veil black hat and her signature tangerine stilettos. This outfit is a perfect example of why you needn't sacrifice your personality in a navy dress. In fact, you should allow your personality to enhance it.

Even before Rihanna's Fenty fashion line, she was a fashion pioneer due to her daring choices. According to Rihanna's ensemble of two suit jackets sewn together and transparent stilettos, you can wear black shoes with a navy dress and still make a big statement.

Selena Gomez's casts a vote for black shoes with her navy blue mini dress outfit outside of BBC Radio. But, her black flats with a wrapped bow detail hint that if you're gonna go black, go interesting. 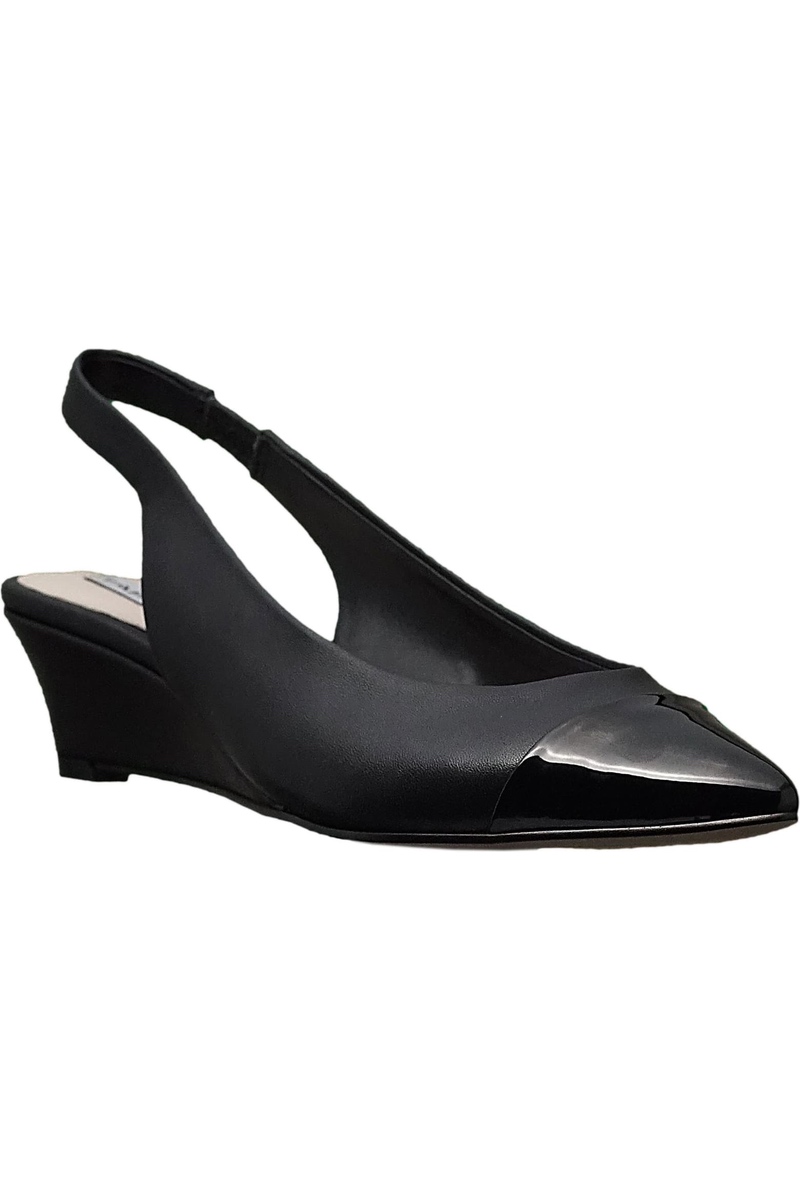 If your aesthetic leans a bit more conservative,Duchess Meghan Marklehas some insight into what color shoes to wear with a navy dress. The Duchess is no stranger to wearing navy blue.

During her New Zealand tour, she wore a jaw-dropping eight different blue looks. She might've broken a world record or something. But, the point is, Markle knows how to wear blue when all eyes are on you. Her vote for what color shoes to wear with a navy dress - more navy.

Model Hailey Bieber knows a thing or two about how to style...anything. Seriously, she's quickly becoming a go-to inspiration for edgy street style looks. And, when it comes to events she doesn't check her edge at the door. At the 2018 Brit Awards, Hailey cast her vote for wearing black shoes with a navy dress. But, only if you throw in a smokey eye and black lipstick for kicks.

Kendall Jenner refuses to settle for any particular shoe color when she wears a navy dress. But, when she attended a Vogue party in Paris she donned a navy blue mini dress from Mugler which she styled with black strappy Jimmy Choo sandal heels.

Gigi Hadid was spotted on the scene wearing a sequin navy blue Tommy Hilfiger dress that she styled with coordinating navy blue strappy heels. Here's yet another vote for navy blue head to toe.

Emily Ratajkowski is the queen of street style and white sneakers. She was spotted yet again mid-commute and sporting a navy blue dress. Rather than dressing up her ensemble, she decided to make it more casual by teaming her navy dress with some chunky white sneakers and dainty gold rings.

Zendaya wore an elegant navy blue midi dress by David Koma to the GLAAD awards. Her shoe of choice for the event was a pair of black strappy Jimmy Choos that let her dress do all the talkin'.

Lily Collins graced the red carpet at the 2019 BAFTA awards wearing a navy blue haute couture Givenchy gown. While her dress was fit for royalty, she styled it with platform black heels and a smoldering plum lip for an edgy look.

If you ask Yara Shahidi what color shoes you should wear with your navy dress, don't be surprised if she says magenta. The model and actress wore a stunning navy blue dress with magenta-colored platform sandal heels at the 2017 8th Annual Essence Black Women in Music Event in L.A.

Bella Hadid traipsed the New York City streets in a navy blue polka dot mini dress. Her shoes of choice were black Doc Marten boots. She completed the casual look with a black Dior bag and round sunglasses.

Priyanka Chopra Jonas casts her vote for wearing navy blue shoes to complement your navy blue dress. She was seen out in N.Y.C sporting a casual navy dress with a light camel trench coat and round sunglasses to finish the look.

Kendall Jenner wore a navy blue strapless Dior dress in Paris. The dress, which she paired with a navy blue cropped jacket, featured flap pockets and a cinched waist. She completed the ensemble with white mules, a Dior round clutch, black rectangular sunglasses, and a round gold necklace.

6 Brands Like Athleta Fashion Girls Take to the Gym

5 Cruelty-Free Antiperspirants and Deodorants You Should Try ASAP